The coefficient of historical and current correlation between Arab capital markets

12:58 2019-03-10
Ziad Qaimari
Share on:
This post has been translated over google translator from original post in arabic
The correlation coefficient is a statistical standard that shows the degree of correlation between two or more variables, used in managing funds and investment portfolios with the aim of helping to diversify both the returns and the expected risks. The correlation coefficient is evaluated within the levels +1 to -1, results close to +1 indicate a strong correlation between variables and vice versa as the results approach -1 -1

The investor in the financial markets in our Arab region may be interested in finding an ideal balance and diversification in his investment portfolio so that it helps him to reduce the risks of fluctuations witnessed in certain markets by finding a balance that is made by adding markets or other less severe investment assets in Its fluctuations and enjoy a negative or weak correlation coefficient with other assets. The more the correlation coefficient is the sale of that market with many fluctuations and that market has little fluctuation, the less your investment portfolio is, and here it must be noted that the level of risk and return required varies according to the investment policy of the person. Desired returns The higher his interest in lowering the risk level

We have seen here that the best way to know the degree of correlation between the performance of Arab markets is to take several periods of time and compare them in terms of correlation coefficient and the changes that occur from one period to another. The following table shows the correlation coefficient for the last 11 years (2008-2018) between those selected markets, and this period was determined with a view to identifying the behavior of those markets before and after the global financial crisis at the end of 2008 in addition to comparing it with shorter time periods

First, let's get to know the performance of the region’s markets from 2008 until the end of 2018, the following drawing indicates the superiority of the markets of Egypt, Abu Dhabi and Qatar over the rest of the region’s markets, where they achieved returns of 34%, 13% and 6% In a row, in contrast, the rest of the other markets are still at lower levels than those recorded at the beginning of the year 2008. Abu Dhabi and Qatar were the first markets to compensate for the losses of 2008, specifically during the second quarter of 2014, while the Egyptian market joined them in the end of 2016 to start achieving returns Higher than other markets since then. 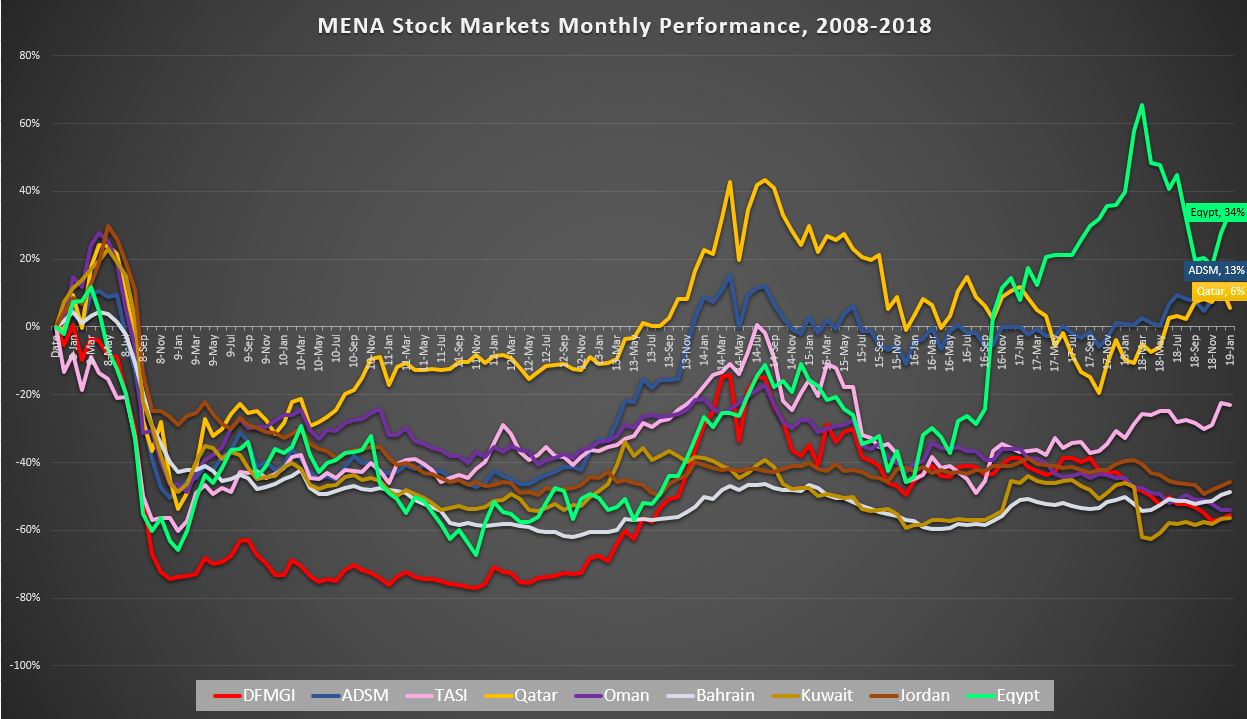 Now we are taking a shorter period of time, so the last five years will be 2014-2018, so what we observe is as follows:

- The continued absence of any negative correlation between any of the markets.